How Tom’s Planner Boosted Their Sign-ups By 44%

Tom’s Planner is web-based project planning software that allows users to create and share Gantt Charts and project plans easily. Individuals can sign up for a free account on their website and begin using the planner right away to create and manage online planning schedules.

The company used VWO tools to increase conversions from its website home page.

Goals: Increase the Number of Visitors Signing Up for the Account

Tom, the company’s founder, was keen to increase the number of conversions from the home page. The website’s home page originally had 2 CTA buttons above the fold – 1 each to sign up for an account and to watch a demo of the software.

This is how the original home page of the website looked:

A variation was created using VWO, and it was tested against the original home page.

Close to 3,000 visitors became a part of this A/B test, and the result was in favor of the variation.

Here’s a quick comparison image showing the original home page and the variation: 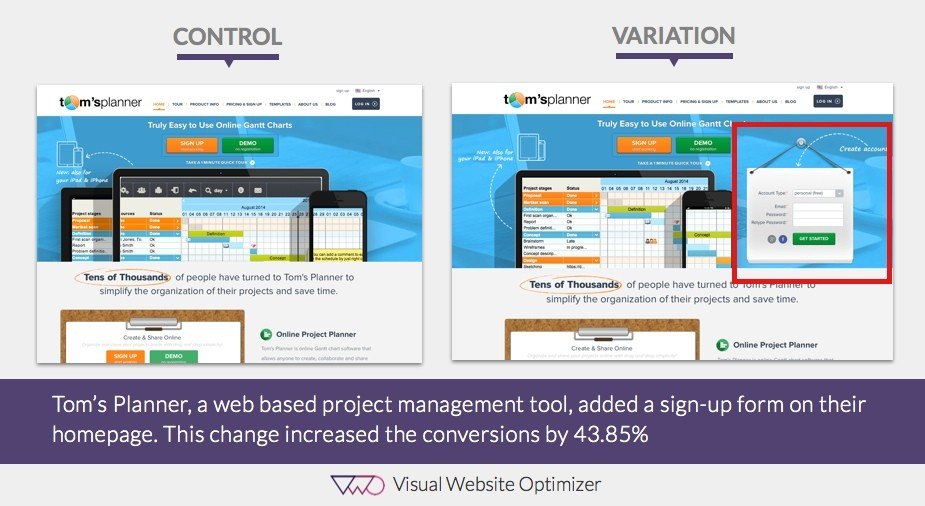 The hypothesis that a simple CTA would attract attention was proved right. The new home page with the sign-up form recorded 44% more conversions.

We believe 3 key factors contributed to the improvement in conversions with the variation:

For visitors to sign up, the original home page had one CTA button above the fold. Adding a form to the page increased the likelihood of visitors signing up, as they could see the form right on the home page, above the fold. Also, they didn’t have to click through a CTA button or reach a different page to create an account. Signing up became easier.

As the sign-up form had only 4 fields, it reduced the friction to signing up for an account. The form asked only for the visitor’s email address; they did not have to share any other personal details to create the account. This helped build trust.

It has been proven in multiple eye-tracking studies that directional cues get immediate attention, because visitors can’t help but notice in the direction they point. The arrow pointing toward the sign-up form not only increased the form’s visibility, but also gave users a clear path of action that moved them to the next stage of the funnel.