Garanti Payment Systems is one of the leading banks operating in Turkey, Istanbul. It offers a series of Bonus Cards which are a kind of credit cards that comes with a plethora of benefits, such as  earning bonus points every time you make a purchase and using them as real money in subsequent purchases, and so on

Garanti Payment Systems hired a VWO Certified Partner performance marketing agency, Hype to manage its conversion optimization programme across all its digital properties for Bonus Card. We got in touch with a senior executive working as an Optimization Team Lead at Hype, to know all about the testing campaign they ran for Garanti Payment Systems and how it affected the bank’s conversions.

Garanti Payment Systems’s primary objective was to get more and more customers to visit its website and apply for Bonus Cards. It also wanted to provide comprehensive information about its campaigns, products, and services to its new and existing customers.

As Garanti Payment Systems, A/B testing has been a significant method at our organization. At the website of Bonus Card, Turkey’s leading credit card brand, we’ve completed more than +50 tests in one year including very advanced ones. We are very happy to choose VWO as our A/B testing tool. The exceptional tool is at the core of the agile optimization process that we have created with Hype.

To avail the bank’s Bonus Credit Card services, customers have to fill an application form on the website itself.

Getting into the nitty-gritty of the entire process, Hype found that the application procedure was too lengthy and complex, which made most of the users leave their forms incomplete and abandon the site.

Based on their research, Hype found some classic ways to decrease form abandonment and increase credit card applications. Firstly, they suggested that the application form should only ask for the most relevant information from the users. Secondly, they wanted to add a sticky banner on the website’s landing page that highlighted the merits of the Bonus Card and allowed users interested in the card apply directly from the banner itself by providing the most relevant information. For this test, they decided to go ahead with the second idea.

The test: 3 variations of the sticky banner were created to be tested for the visitors. All the variations asked for the citizenship ID number and phone number for users to access the form. Hype suggested alterations in the informative text placed next to the input boxes in each of its variations. This is what control looked like: 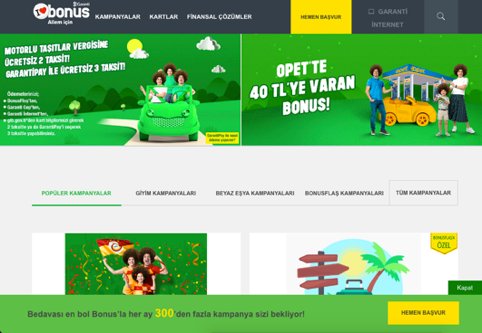 Here, the CTA directed users to the application page. Hype changed this to enable the user to directly apply from the banner. 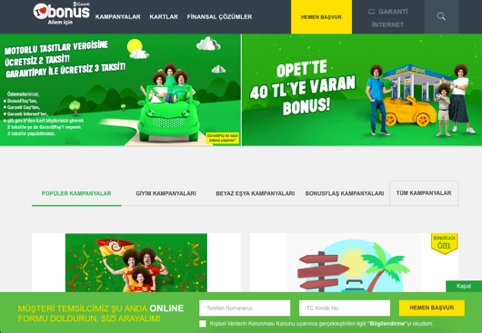 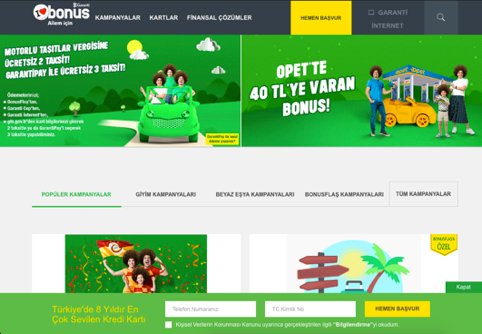 Result: Hype ran the test for about 18 days, wherein a total of 119,000 visitors were engaged. The first variation with banner copy saying, “There are more than 300 offers every month for the Bonus Credit Card users,” increased the number of applications received by 24%. While the other two variations were unable to match the pace.

We have been working with Garanti Bonus for their conversion optimization needs. We have been intensively doing A/B tests and customizations to increase their conversions for a long time. We use VWO in this process since it has powerful features and makes implementations easier. By using VWO’s advanced features in our A/B tests, we increased credit card applications by 24%.

Garanti Payment Systems decided to go live with variation 1 for its Bonus Credit Card. The winning variation is now served to all the users and is constantly being optimized through continuous testing to increase the conversion rate even further.