Grene’s history has its origin in 1915 Denmark, when its founder, Chr. C. Grene, started whole-selling agricultural production items. But in Poland, it began in 1996 after privatization. Today, it has become the most recognized brand of stores, with over 100 years of experience, selling spare machine parts, zootechnical products, seeds, tires, tools, small equipment, specialist protective clothing, and agricultural toys. Grene also supplies products that match individual requirements.

GRENE has been using VWO Services since November 2018, and the VWO Platform since even before that.

For each of the campaigns discussed in this success story,  the end goal was different:

GRENE, in collaboration with VWO Services, ran a series of campaigns to optimize their website and improve conversions. Discussed below are various campaigns that drove a significant increase in conversions for GRENE:

Goal: Make it easier for users to find desired products on the mobile listing pages from the gamut of options available.

Challenge: In the old version, the product boxes were occupying too much space on the limited mobile screen space available, and the users were finding it difficult to scroll down too much in order to find what they were looking for. 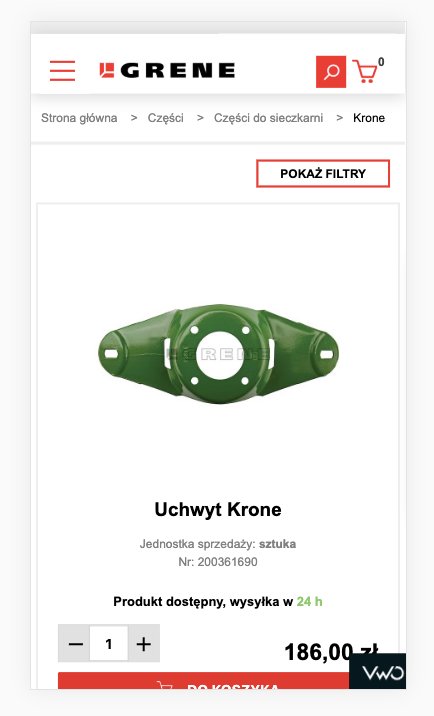 To make finding products easier, VWO Services along with the team at GRENE decided to optimize the use of available screen space by downsizing the space each product used to display information. The CTA button too was replaced by a cart icon with a circular perimeter of red color which upon clicking changed color to green indicating that the action is complete i.e., the product has been added to cart. This is what the variation looked like: 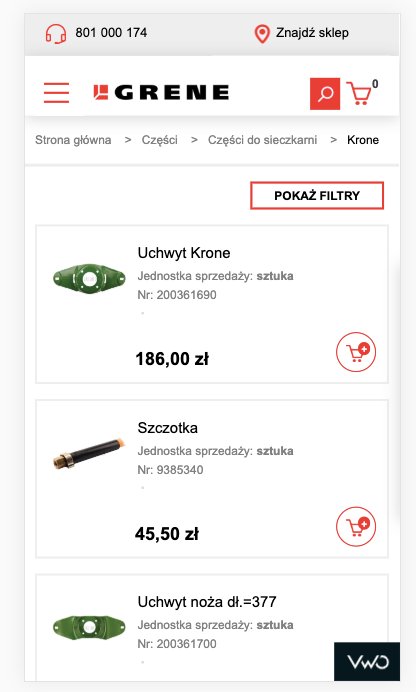 The change expected was that the users would have to scroll down less with the new design, resulting in increased impressions on each product and higher clicks.

Challenge: GRENE has 4 USP’s which were highlighted above-the-fold on the homepage, occupying the prime property. However, the USP’s looked visually bland and failed to grab the users’ attention.

VWO Services redesigned the way the company’s USPs were displayed – unlike the bland color in control, the variation had the USPs highlighted in bright, green color. The hypothesis was that introducing green color to the icons displaying the USPs would result in increased impressions.

Along with the color change, the USP’s were broken down into two parts with keywords in the first row and related important content in the second. The hypothesis was that this change would make it easier for users to consume the benefits GRENE offered and thus complete the entire buyer’s journey.

Result: The campaign ran for a period of 15 days (May 9, 2019 – May 23, 2019). The metrics tracked were Interaction/ Clicks on the USP’s and eCommerce CVR. The test results showed a phenomenal spike in the user interaction with these USPs, which rose from 0.26% in the control version to 2.28% in the variation, with a 100% confidence level. Additionally, the eCommerce CVR shot up from 2.64% to 3.18% during this period.

Challenge: A lot of users were clicking on the FREE DELIVERY USP’s highlighted above the main CTA button, assuming it is a button. The users were also unable to see the total sum value of each product if more than 1 product was added to the cart. In addition to that, users had to scroll all the way to the bottom of the mini cart to click on the main CTA button, which increased the evaluation time of the products added to the cart.

The hypothesis behind this campaign was that adding a CTA button at the top of the mini cart would help users quickly transition to the cart page. Also, a more sorted layout with a ‘remove’ button on the right (to avoid any unwanted clicks), the addition of the multiplied value of products and a bigger CTA button would motivate users to go further down the conversion funnel and complete their journey. This is what the variation looked like:

GRENE has been using VWO to A/B test all their experience optimization ideas with the help of VWO Services. Owing to this, from 2017-2018, they witnessed an uplift in several metrics that have a direct bearing on their business: