Frictionless Commerce is a digital marketing agency that specializes in helping Shopify websites improve sales through the use of buyer psychology techniques to influence and convert new buyers. Led by Rishi Rawat, the firm has been instrumental in improving conversion rates for hundreds of brands over the past 12 years. They have been using VWO since 2012 and typically conduct 1-2 A/B tests per month for every client.

We spoke to Rishi to understand the CRO process followed by Frictionless Commerce, to deep dive into a successful experiment that his team performed recently, and to gauge how VWO has helped the team achieve uplifts in revenue for their clients.

The agency’s approach to CRO

At Frictionless Commerce, the team looks at CRO through the lens of converting first-time buyers. The reason behind focusing on this niche is the observation that first-time buyers behave in remarkably similar ways across industries – so whether they’re buying a house for the first time or a pair of running shoes, the questions they face are largely similar.

By A/B testing on new buyers for the last 12 years, most of which was done using VWO, the team has identified 9 key drivers that influence first-time buyer decisions. The conversion copywriting process at Frictionless Commerce is based on these 9 psychological drivers.

At the onset of a project, the team’s focus is on identifying the correct selling angle for the client. Rishi believes that finding the right concept and telling the brand story in an engaging way is more important than testing design elements upfront.

Most case studies revolve around UI/UX changes, but copy changes can lead to incremental improvements that collectively over time bring in huge numbers – this is something that a lot of brands miss out on because they are so focused on testing their UI and UX only

Rishi also believes that at the start of the project, when the client’s trust still remains to be earned, making big design and layout changes can deteriorate progress and get you entangled in a feedback loop. Once the team has tested their concept and copy, brought in the numbers, and thus won the client’s trust, they have evidence to move ahead and test bigger changes.

“UI/UX changes are more expensive to set up as a test. They can lead to performance issues if not implemented correctly. But the biggest issue with them is that they’re political. A design change on a client’s key page invariably leads to a lot of back and forth even before the actual testing begins.”, he says.

The team at Frictionless Commerce, therefore, opt to give a choreographed experience to website visitors. They make micro-level improvements like adding CTAs at strategic positions on the page. When a visitor interacts with one instance of the CTA, the remaining instances disappear.

The goal: Improving conversions for a product that’s free

Rishi has observed typically two shopper modalities in eCommerce: skimming and digging. The skimmers browse quickly through information on pages while the diggers like to deep dive and consume content in a detailed fashion.

One of Frictionless Commerce’s clients, Grüum, on a mission to get rid of plastic shampoo bottles, created an offer where they gave one shampoo bar for free. The shampoo bar, wrapped in paper, is a biodegradable alternative to conventional shampoos.

The product was free, and the page with the offer on it was already doing well. The goal was to take the conversion rate even higher.

There were a couple of obstacles in the path to achieving the goal:

The team hypothesized that building a convincing selling angle around the following aspects in the copy will influence and improve the conversion rate of new buyers:

The test was carried out for both desktop and mobile visitors.

Dozens of micro-improvements were made within the copy through annotation and deconstruction of the original page. However, the layout of the page was not disturbed. The aim was to reconcile both groups – skimmers and diggers – on the page through its copy. 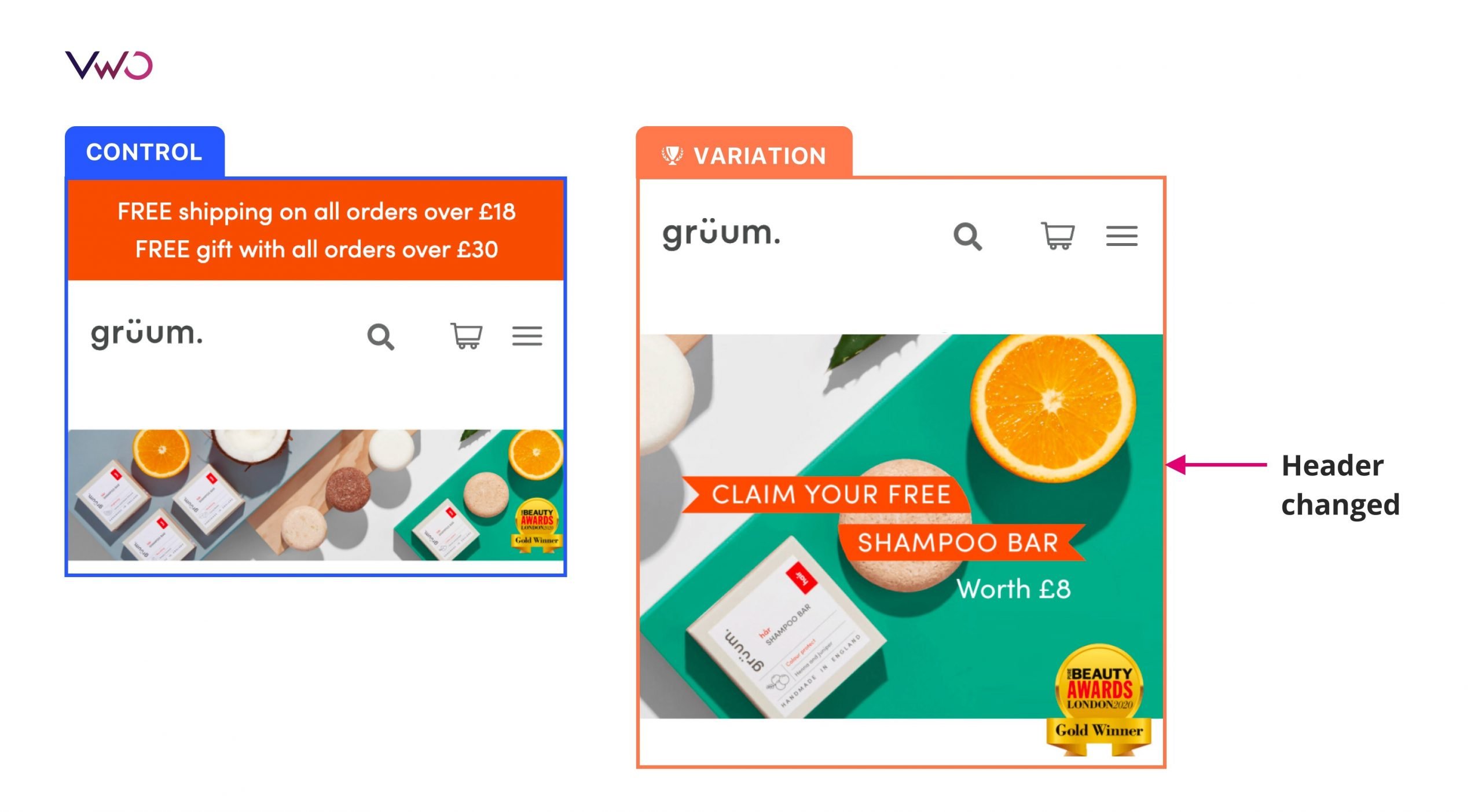 The first thing they focused on was the paid shipping aspect. Instead of putting out the message that the buyer would need to bear the shipping costs, they added a clickable element that would talk about the value of fairness that is important to Grüum and explain why shipping is not free, while also asking visitors if they thought this to be fair. A similar strategy was used to explain why the first shampoo bar is free and to showcase the company’s awards.

The second important strategy was adding a button called – The Whole Story – and this was aimed primarily at the diggers. For the diggers who clicked the link, a lightbox would open, telling the entire brand story.

The copy spoke about how the readers were part of a minority; thereby grabbing their attention, about how the brand needed their help, why shampoo bottles were bad for the planet, why change was difficult but possible, and how in the past people have changed habits after learning new information. At the end of this, it asked the reader for their thoughts on the brand story. This feedback mechanism has given the team data on the persuasiveness of the copy. 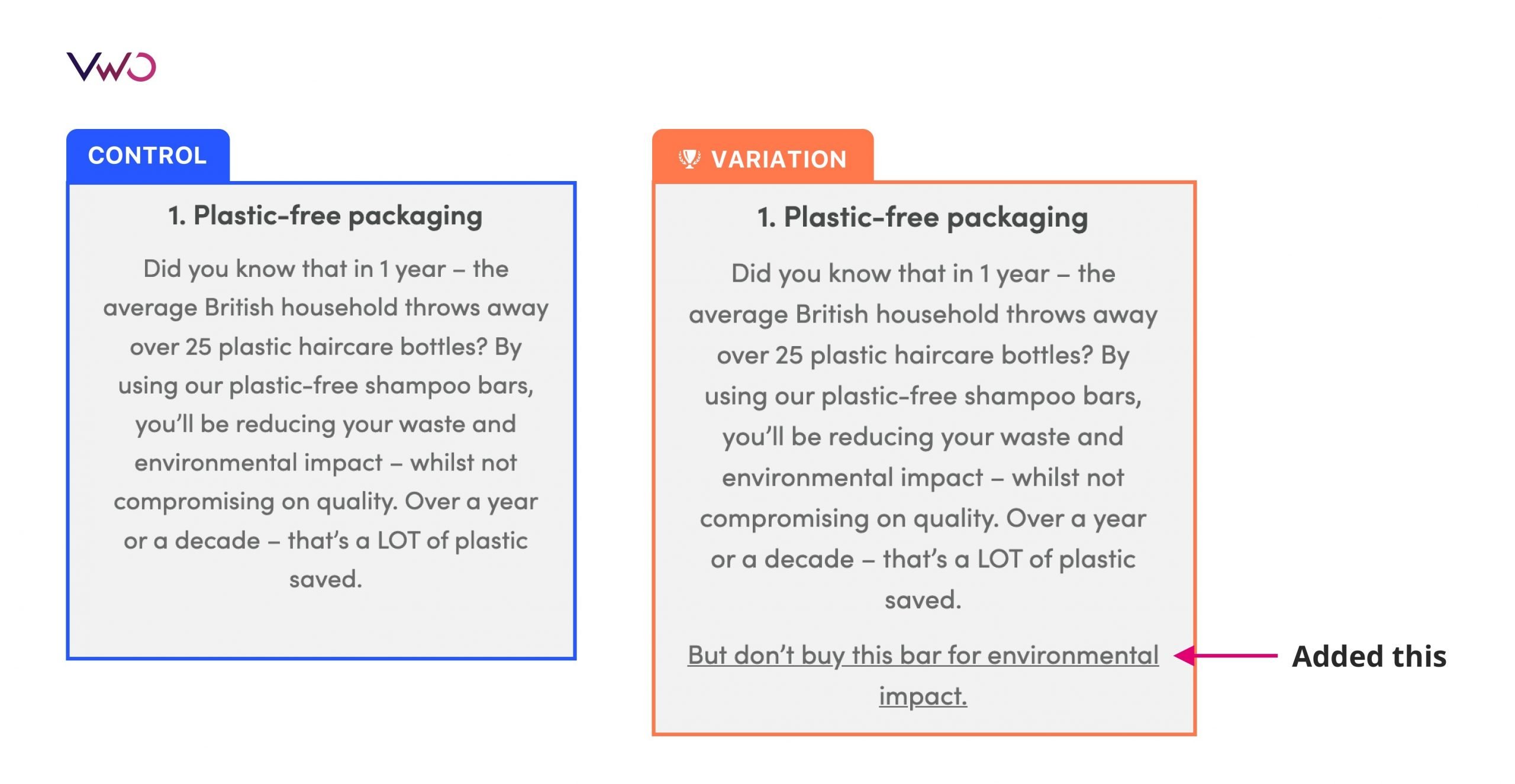 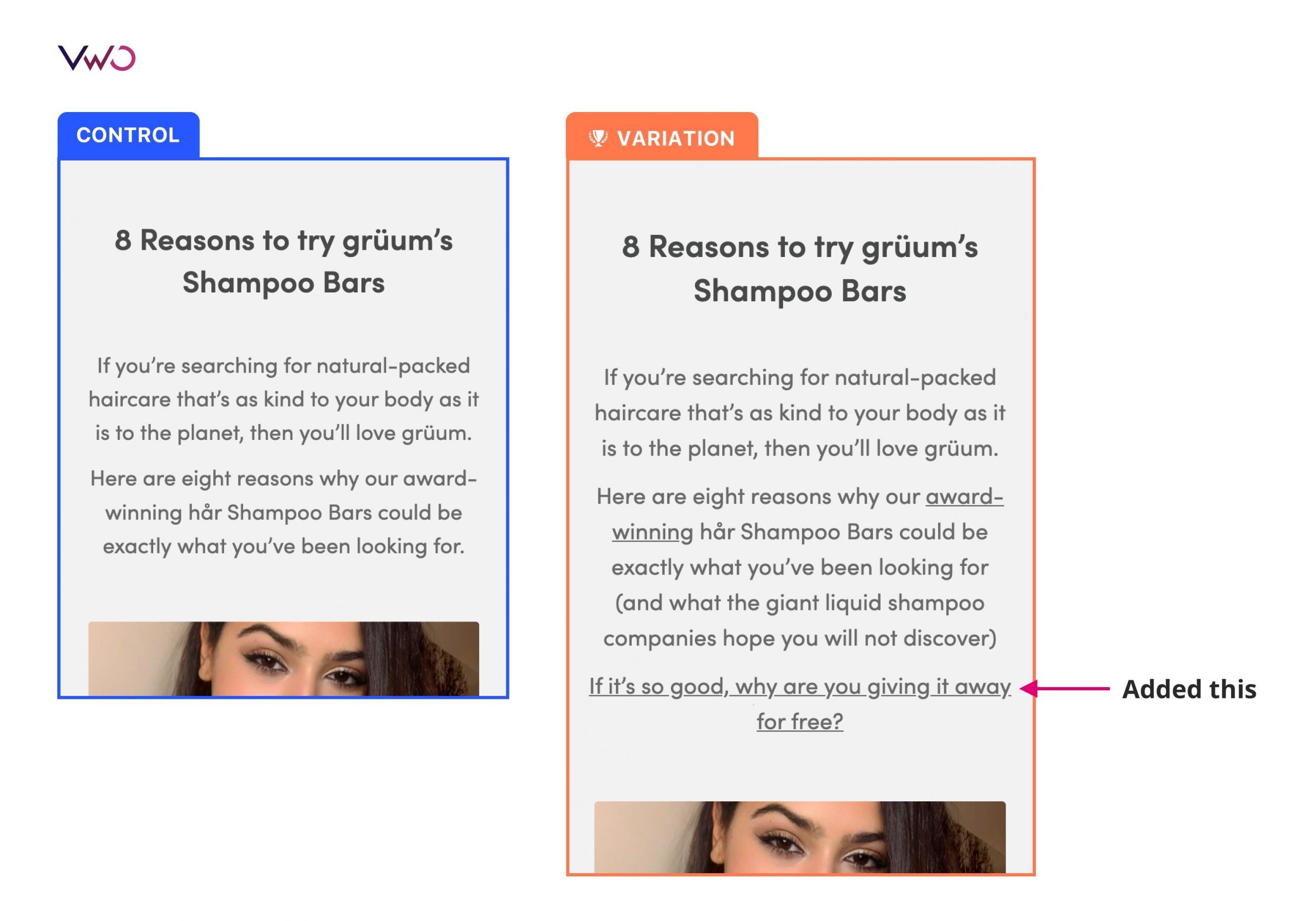 The test ran for 5 weeks and nearly 25,000 new visitors became a part of it. With a 5.97% increase in conversion rate, 2,778 new orders were generated. (VWO makes A/B tests easy with its SmartStats feature. You can conclude tests faster with accurate results that you can trust without getting into the math behind it. Take a free trial to check this out for yourself.)

For Frictionless Commerce, Grüum was a different challenge than others because the product in question was free.

“Normally the tension on a product page is caused by the price point – and a clever selling angle needs to overcome this tension. But if the product is free – the traditional tensions disappear. You then need to figure out what other elements can be introduced to induce engagement.”, says Rishi.

What has made me stick around with VWO for all these years is that you have the best technical support in the world for any SaaS product. This is the only thing I care about as a marketer – that when I face a technical issue, a competent person will take care of it. Not just send me a link to a help file but actually resolve the issue.

The team at Frictionless Commerce studies the impact of A/B tests beyond the conversion goals. They want to understand how deep in their sales pitch did the new visitors go and how much of the content did they interact with. They’re able to do this easily with VWO – as it enables them to set up micro-goals on the page and track them as micro-conversions.

Get deep insights into visitor behavior, formulate hypotheses, plan tests, and set up goals based on your business metrics – all with VWO. Start a 30-day all-inclusive free trial today.