13 Tips for Producing High-Converting Videos for Your Business

Mohita Nagpal
A lover of the written word, I plan to be the planet's first sit-down comedian. When I am not rethinking a misplaced comma, I write about conversion optimization and website usability. You can follow me @mohitanagpal

The statistics associated with online videos are fascinating. It has been proven that viewers retain 58% more of what they see versus what they read, online shoppers who see videos are 1.81x more likely to buy a product and a site is 53 times more likely to appear on page one of search results if it has a video.

To top it off, there are countless case studies of videos increasing conversions for both eCommerce and SaaS companies. So it probably won’t be long before you too decide to get a video made for your site — be it product, instructional or explainer.

Here are 13 tips you should keep in mind before and after you take the plunge: 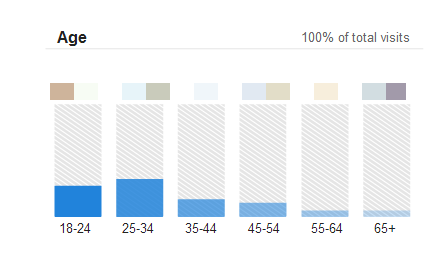 Start by drawing up a picture of your target audience. Find out their demographics such as their age group, ethnicity, gender and factor all this intelligence when getting the script ready. Figure out how your target audience talks, their aspirations, are they even into videos? If the answer is no, you might want to rethink the very idea of producing a marketing video as it might not give you the returns.

BrookdaleLiving, which provides senior living solutions, A/B tested two versions of their landing page. One version had an image of an elderly woman while the other had a video. They expected the video version to outperform the image version but the results turned out to be the opposite. One of the analysis for the video not doing that great was that majority of Brookdale’s visitors were elderly females who are not patient enough to sit through videos.

Go to Google Analytics to find what browsers, operating system and devices your visitors are using and make sure your video format is supported on them. 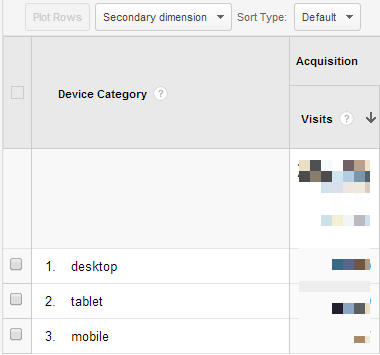 There’s no point in investing a bomb on an awesome video if it is not supported on the browser used by majority of your visitors. One of the best supported video formats on the internet is MP4. Here’s a little video compatibility chart that might be useful for you.

Another metric to keep in mind is the average internet speed of your visitors. If it’s on the lower side, then you could compress your video size so that it streams faster.

Not only do men and women think very differently, they also perceive ads and images differently. An example would be a study of exercise advertisements conducted by the University of Michigan’s Michelle Segar. While such ads invoked a feeling of increased motivation in overweight men, women reported slagging motivation and body image. However, overweight women responded positively when the peg of these ads was shifted to healthy living.

There’s another study about how women respond better to images which convey emotions. Depending on the break-up of your target audience, it will be a good idea to consider these gender-specific marketing insights while writing the script and choosing the talent for the video.

4) Don’t stuff it with too many details

You are shelling out some serious money on that video so you want to maximize every micro inch of frame. Right? Wrong! Don’t try to oversell your product in the video. This especially holds true for SaaS explainer videos. If your product has 50 features, show only the most important 5 or 10. Research has proven that too many choices can actually work against you as it leads to indecision.

According to a Wistia report, more people will complete watching a 1 minute video than a 2 minute video. In another experiment, two videos were shown to two sets of users. Both videos were identical except for the fact that the second one was 10 seconds longer. On an average, viewers watched the shorter one 72% of the way through while the longer one was watched 50% of the way through. And I rest my case.

If you are making a tall claim or breaking some myth in the video to market your product, then back up your statement with a proof — preferably a visual one.

Take the case of SixPackAbsExercies.com which saw a 46% increase in conversions after adding a video on its sales page. In the video, personal trainer Carl Juneau goes about breaking the myth that you can get well-defined abs by just doing crunches and sit-ups. He cites the example of a record holder who trained his abs for six hours a day and still didn’t have six-pack abs. Carl then shows the image of the guy working out to back up his claim. Here’s a screenshot of the video: 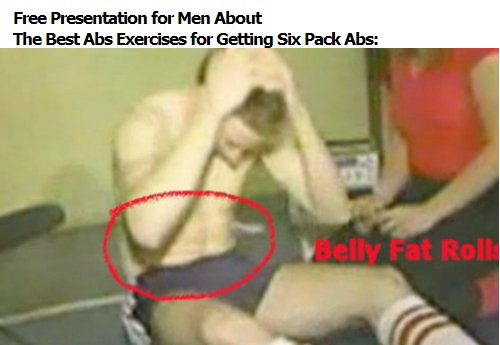 Though it’s a given that your marketing video ought to be well executed in order to instill trust in the mind of the viewers, there are many examples of low-budget videos going viral on YouTube. These are typically shot on shoe-string budgets, have the staff as the talent and are not that high on production values. But what works in their favor is a smart script and an unconventional approach. Take the case of the epic Dollar Shave Club video. It was shot in just $4500.

So, focus on the quality but don’t let it be a constrain if you can’t afford it.

8) Have a prominent CTA

Now that you have done the hard work and got the visitors to see your video, put in a clickable call to action button urging them to buy your product or sign up for your free trial or whatever that your goal is. See how Moz does it in its video: 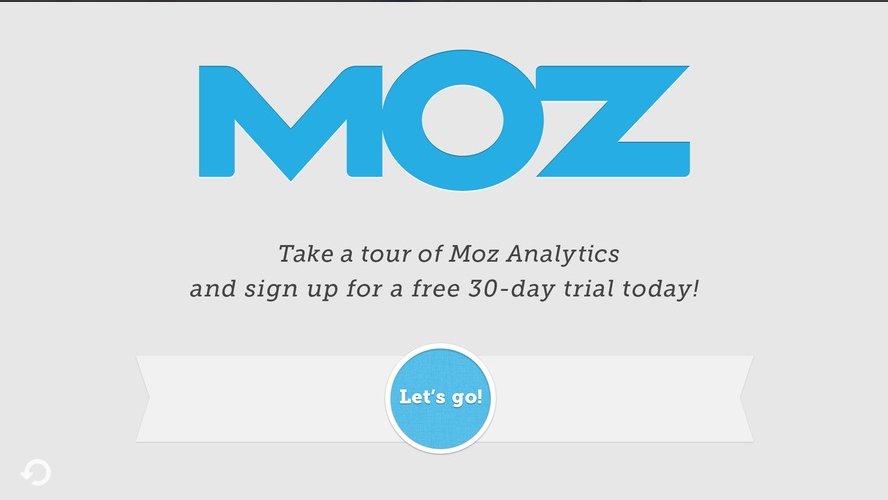 To add the CTA, simply overlay your video with an image once the video has stopped playing. Or you can use a tool like ViewBix which allows you to add CTAs, integrate e-mail links and social share buttons on the page.

If you have customers sitting around the globe, you could get the voiceover of the video recorded in multiple languages so that a person sitting in Spain can watch the video in Spanish.  There are various personalization tools that help you show targeted messages based on geo-location data of the visitors.

You could also create shorter and longer versions of the video and target them according. You might want to show the shorter version to a new visitor and a longer, detailed version to a returning visitor or a visitor who reaches a certain ‘engagement threshold’ you have set. You could test to see which version works by using VWO which allows you to segment your data.

There’s no way for Google to read videos so you have to get the title, description, tags and categories right. These are the things through which Google will be able to identify your video. Make sure the tags clearly identify who, where and what is featured in the video.

11) Don’t put it up on crucial conversion pages

Now that the video has come out all nicely and you are eager to put it up on your website for the world to see, spend some time on deciding what will be the best page to place it on. The purpose of the video is to give information and convince the visitors. So, the homepage or a page where the visitors go for extra information will be good choices.

If we take the AIDA marketing model, this is what you can do:

See how CrazyEgg places its explainer video on its homepage. A side anecdote: They made an extra $21,000 per month from it. 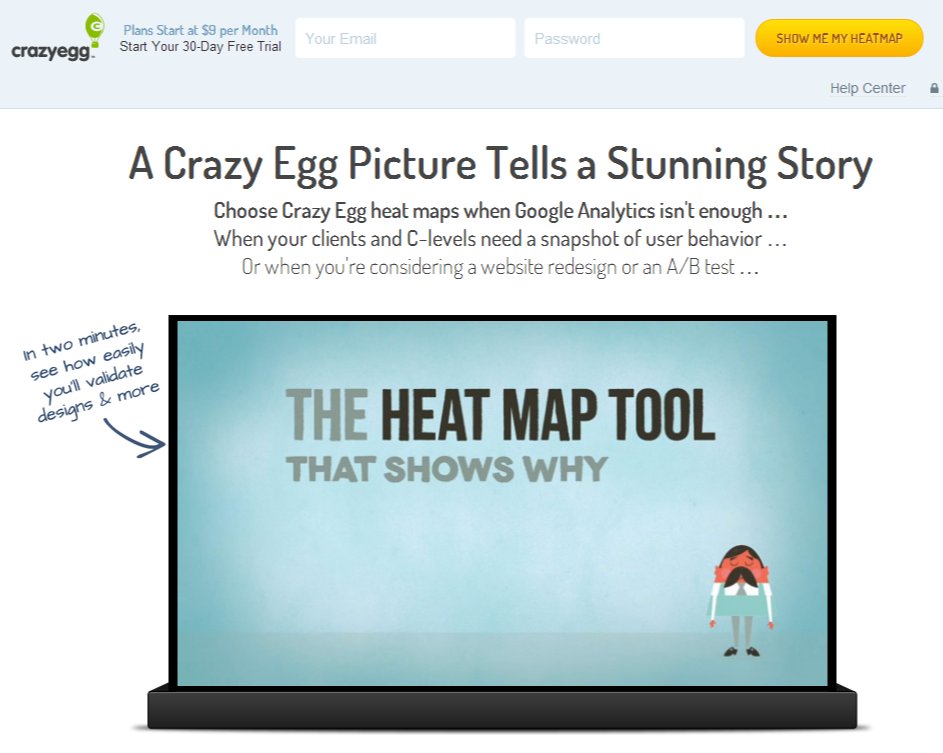 Once the video is up on the website, you could test the following aspects:

The default thumbnail image could be non-representative of the content or could be plain confusing.  Try A/B testing different images to see which one leads to more clicks. Read this to figure out how to run this test.

According to this report, shoppers who view videos in a larger player are 2 times as likely to purchase. May be it’s the same logic as for large and smaller images? Why make guesses. Test if it works for you.

“If the video occupies the top left of the page, then it mimics the positioning of video players on video sharing sites such as YouTube, Metacafe and Veoh. This position brings with it an expectation of entertainment and or information. Placed elsewhere, the video may appear to be more of an ad unit which may impact the expectations of the viewer, but you won’t know for sure unless you test it.’

# Play icon or Play me now

You can test if just having the play button works better or a play button that is accompanied by ‘Play Now’ or ‘Click to Play’ text.

Do you want to tell the viewers upfront how much time do they exactly need to invest? CrazyEgg has people telling that they will be taking just 2 minutes of their time.

Now this is highly controversial. I personally get all flustered if videos start auto-playing (especially when I am not at all expecting a video on the page). It’s as disempowering as being forced to open links in new tabs. But you might want to test how it works for you.

You could actually test three versions — Auto Play, Play on click and Play on Mute with the option to turn restart and turn on sound.

13) Use the video at multiple places

You don’t have to restrict the video to just one lonely corner of the website, place it on your newsletter or see how WebEngage cleverly uses it in its pop-up box.

“I turn on my computer. I wait impatiently as it connects. I go online, and…

We’re pleased to announce the next generation of VWO, and we’re calling it the VWO…

The article is co-authored by Namraata Badheka. Online shoppers already spent $640 million by 10…